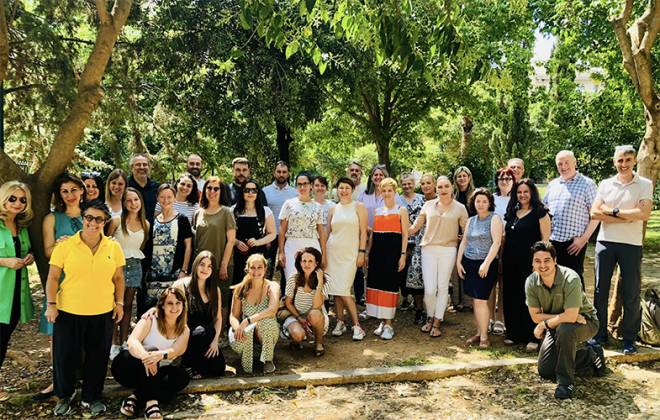 On the 6th and the 7th of June, Action Synergy hosted the 3rd MonTech Transnational Meeting and the last part of the Training of trainers in Athens (Greece).

Twenty-two trainers from Spain, Romania, Greece, Turkey and Bulgaria joined the event: three school leaders and teachers from twelve multicultural schools. Fifteen had already taken part in the three-day training in Girona (2nd-4th February), while the rest had an information transfer from colleagues that had attended it. Moreover, they all had been implementing the activities included in the 1st version of the MonTech Teacher’s Guide in their class setting.

Fifteen staff from the partner organisations participated in the Consortium meeting and accompanied the trainers. In addition, the University of Girona, Montessori Palau and Waterpark Montessori International lead the Training the trainers’ workshops.

On Monday morning, training sessions started with a PowerPoint about the experience implementing MonTech by each school or country: activity development and children’s learning evidence wrapped with a conclusion. It continued with a Simple Machines or a Makey Makey workshop about Ancient Greece Temples at the election of the attendees, where not only participants had to be actively involved but also observe critically to identify the MonTech principles. After lunch, an interactive presentation about the MonTech principles and workshop structure followed to clarify and unify the MonTech activities and methodology essence, reminding the theoretical framework that supports its practice.

On Tuesday, attendees took part in different Discovering Scratch Workshops which aimed to be a good example of MonTech project performance. Subsequently, trainers were organised in groups, and each provided feedback to six to nine activities covering this way all the workshops gathered in the Guidance Book for Teachers. Finally, data collecting tools and Teacher Training Guidelines were discussed.

Both event afternoons’ were spent reviewing the finished, the ongoing and future project deliverables and tasks. There was a focus on the documentation required in the upcoming report. Coordination and Management, Quality Assurance, Sustainability, Evaluation and Dissemination were discussed.

This project has been funded with support from the European Commission. This website reflects the views only of the author, and the Commission cannot be held responsible for any use which may be made of the information contained therein.

We use cookies to offer useful features and measure performance to improve your experience. By clicking “Accept All”, you consent to the use of all the cookies. However, you may visit "Cookie Settings" to provide a controlled consent. You can find further information in our Read More
Cookie SettingsAccept All
Manage consent

This website uses cookies to improve your experience while you navigate through the website. Out of these, the cookies that are categorized as necessary are stored on your browser as they are essential for the working of basic functionalities of the website. We also use third-party cookies that help us analyze and understand how you use this website. These cookies will be stored in your browser only with your consent. You also have the option to opt-out of these cookies. But opting out of some of these cookies may affect your browsing experience.
SALVEAZĂ ȘI ACCEPTĂ
Propulsat de